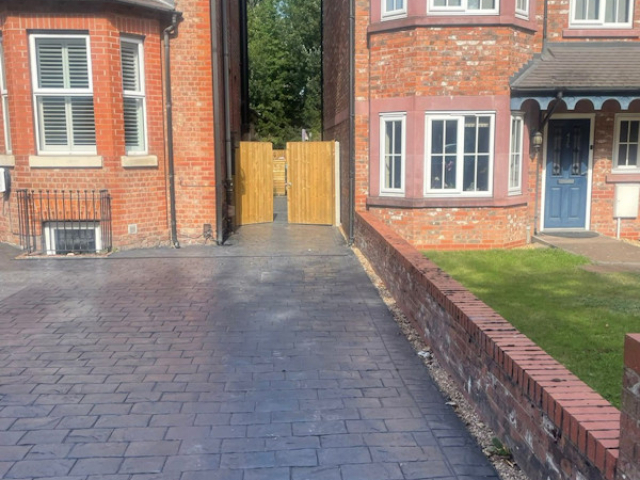 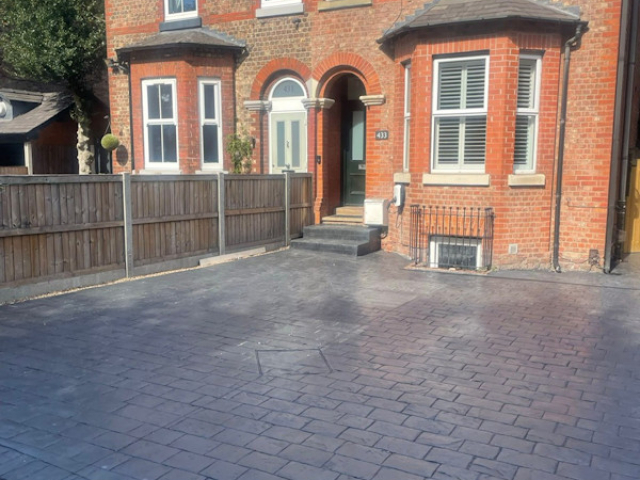 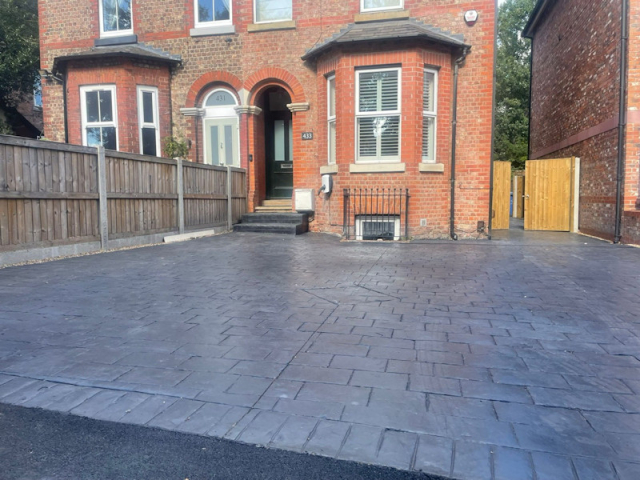 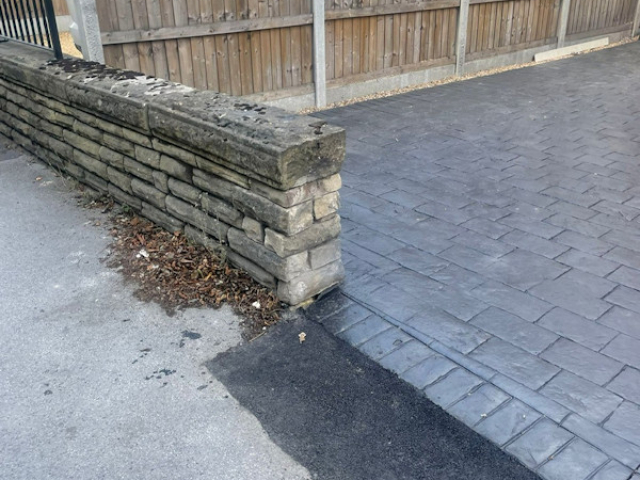 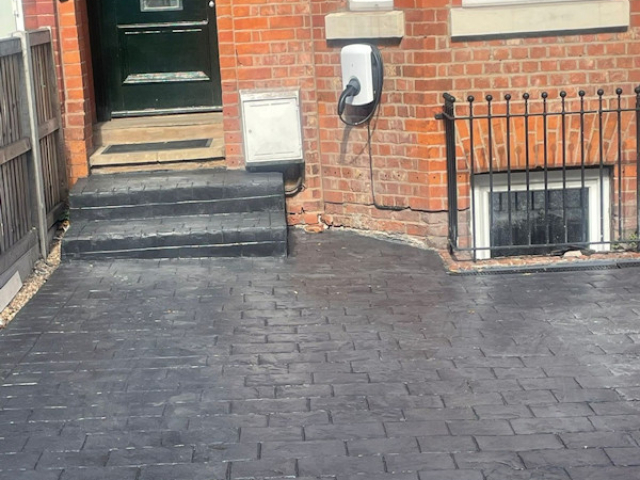 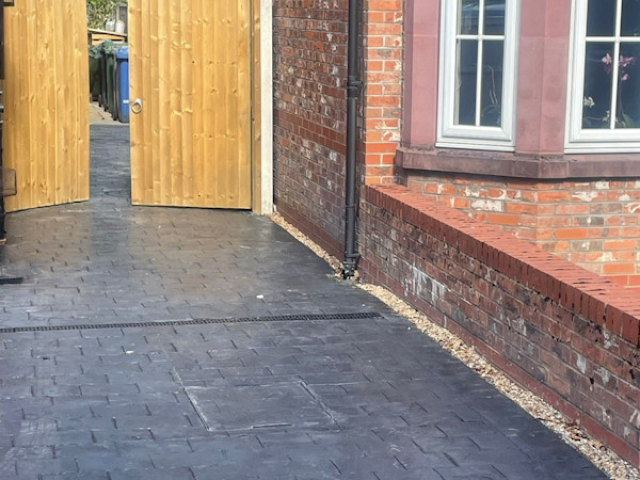 Lasting Impressions recently installed a beautiful new pattern imprinted concrete driveway in Timperley, Altrincham. This was the perfect choice to complement a Victorian Semi. We covered the area across the front of the house as well as down the side of it which was wide enough to accommodate double gates leading through to the back garden.

In the towns and villages around Greater Manchester, parking is at a premium so maximising the space in front of your home and creating a pattern imprinted concrete driveway in Timperley, Altrincham, is a great way to give yourself more space to park your car/s and that’s what our clients did. They opted for large London cobble for the pattern and coloured in classic grey. With the black front door, grey railings around the cellar window as well as the grey guttering and grey slates above the front window, all the key features of the house were nicely tied together.

As part of this project, we built a double step leading to the front door using the same pattern imprinted concrete. This meant it blended in creating a seamless link between the driveway and the house. We did the same with a manhole cover which was in the centre of the driveway. This made it far more discreet and less intrusive. We also added an ACOS drain along the perimeter of the driveway where it met the front of the house. This ensured that the driveway was SUDs compliant as the drain gives surface water somewhere to flow into.

We covered a section of the footpath with a strip of tarmac to raise the height of it to the same level as the driveway. The final part of the process was to seal the pattern imprinted concrete driveway in Timperley, Altrincham with a mid-sheen acrylic seal with anti-skid agent. You can see what the finished driveway looked like from the photographs included.

If you would like to find out more about having a pattern imprinted concrete driveway, contact Lasting Impressions Driveways on 0161 980 8822.

Excellent. All very accommodating, nothing was too much trouble. Would definitely recommend to anyone.

Friendly, helpful team. I am please with the new drive!

Excellent. We feel that we got advice and help in selecting the right product for our needs. The installation team were also excellent.

The service provided was excellent. The team who did the preparation, pouring and finishing of the driveway did a brilliant job and were extremely pleasant workers to deal with. They put forward suggestions regarding the shaping of the driveway which added to the aesthetic appeal. I would recommend the service and this team to anyone considering a new drive.

Great job – has attracted a lot of attention.

The team were first class. The job they did was absolutely superb and I am highly delighted with the end product. I will certainly recommend you and your work to any of your future customers.

The team and service was excellent. Very well organised and kept us informed as to progress. All in all a job very well done and it looks good. Thank you

I found the team brilliant, very helpful, well mannered. I could not ask for more. I am pleased with the result and it makes my life a lot easier and of course it looks brilliant.

This website uses cookies to improve your experience while you navigate through the website. Out of these, the cookies that are categorized as necessary are stored on your browser as they are essential for the working of basic functionalities of the website. We also use third-party cookies that help us analyze and understand how you use this website. These cookies will be stored in your browser only with your consent. You also have the option to opt-out of these cookies. But opting out of some of these cookies may affect your browsing experience.
Necessary Always Enabled
Necessary cookies are absolutely essential for the website to function properly. This category only includes cookies that ensures basic functionalities and security features of the website. These cookies do not store any personal information.
Non-necessary
Any cookies that may not be particularly necessary for the website to function and is used specifically to collect user personal data via analytics, ads, other embedded contents are termed as non-necessary cookies. It is mandatory to procure user consent prior to running these cookies on your website.
SAVE & ACCEPT